A new poll has given the Conservatives a lead equal to Labour’s total polling figures.

Conducted by ComRes for the Sunday Mirror, it is projecting that Theresa May’s party is twice as far ahead as Jeremy Corbyn in the race to secure Downing Street. 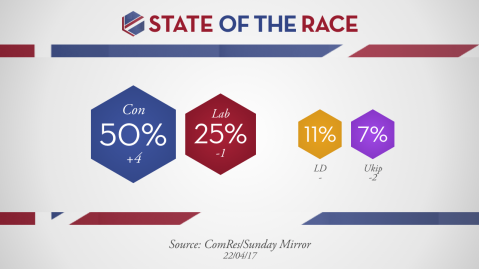 The findings give Mrs May the highest vote share for the Tories since January 1991.

The Liberal Democrats received an 11% share in the poll, with Ukip trailing on 7%.

The research also suggested that 62% of voters think that May is the best candidate for Prime Minister. Jeremy Corbyn polls on a mere 25% for that question. A tenth of people think that Tim Farron would be best suited for Number 10 and 4% are backing Ukip’s Paul Nuttall to become the next leader of the UK.

With only 46 days to go until polling day, even one in five Labour voters believe that Mrs May is best for the job.