A five-second time penalty for an “unsafe re-entry” meant that the Ferrari driver missed out on what would have been his first win of the 2019 season.

The call meant that despite Seb passing the chequered flag first, it was Lewis Hamilton who claimed first place after finishing within the five-second margin.

“They’re stealing the race from us”, the Ferrari exclaimed over team radio.

In an emotional response at the post-race press conference, Vettel said that he disagreed with “where the sport is now”.

“I just think it’s wrong”, the German continued. “Ultimately it’s not the sport I fell in love with.”

Seb skipped the post-race interview, marching through the paddock to the Ferrari hospitality suite. It’s assumed the four-time world champion was then persuaded to return to stand on the second place podium.

Not before, however, switching the first and second place boards in front of Hamilton’s Mercedes and the spot in which his Ferrari should have been parked.

#F1 WATCH: Sebastian Vettel switches the first and second place markers in protest of the stewards decision that saw him lose the #CanadianGP pic.twitter.com/W8VZLT7bRL

Following the podium ceremony, Vettel told the crowds not to boo Hamilton, as jeers surrounded the eventual winner.

Charles Leclerc completed the podium line-up after a steady race, ahead of Valtteri Bottas who crossed the line in P4. Bottas collected the extra point for the fastest lap.

In fifth came Max Verstappen, who made up six places after starting the race in eleventh after an underwhelming qualifying thanks to Kevin Magnussen’s Q2 crash. 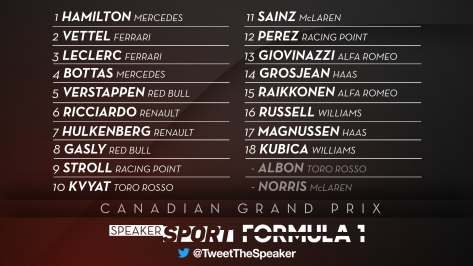 Renault had a successful weekend in Montreal. Daniel Ricciardo qualified in P4 and finished the race in sixth place.

The Australian managed to defend his fifth-place position from Valtteri Bottas for the opening stages of the race, but ultimately fell foul of the Mercedes’ pace.

His teammate Nico Hulkenberg came in just behind him on the timesheet in seventh.

After the contentious ruling, Lewis Hamilton has extended his lead on the 2019 standings. The Briton now sits with 162 points, ahead of teammate Bottas who holds 133, and Sebastian Vettel with 100.

#F1: He lost the race, but he won the vote – Sebastian Vettel is your #F1DriverofTheDay#CanadianGP pic.twitter.com/V5VxA1lhRp

The drama on the paddock resulting from the stewards’ decision is likely to dominate the conversation for the next few days, if not weeks – and once again ignite energy into calls for loosened regulation on the track.

Sebastian Vettel will have another chance to make a dent in Hamilton’s lead in two weeks time when Formula 1 makes its return to France.

The French Grand Prix will get underway at 14:10 BST, from Circuit Paul Ricard on June 23.